While it is mountains calling during vacations, Purplle.com co-founder and CEO Manish Taneja gets his daily dose of relaxation from walking, when he leaves behind his gadgets and takes along just a pen and paper

I call myself a mountain’s boy, for that is where I love spending time,” says Manish Taneja, co-founder and chief executive officer of Purplle.com, a name to reckon with in the beauty e-commerce industry. When he is off work—which is rare, he says—he prefers travelling, reading and spending time with his family. Vacations are always planned around his daughter’s school holidays.

Taneja recently visited Ladakh, his favourite travel destination. Prior to that, he had made a trip to Bhutan. Next year, it will be Kashmir and maybe Mussoorie, he says.

“One thing I found fascinating in Ladakh was that there are more women in the workforce than men there. I have seen women build roads there. And, people really care for nature,” he points out.

Pleasure trips have been quite insightful for Taneja. He did not find a single beauty shop in Ladakh or Shimla, an observation that got him discussing the possibility of penetrating into Tier II and III cities with his partner.“ India retail is underpenetrated and unorganised. Maybe there is a local nuance to it which we will learn over time, but we could definitely partner with local entrepreneurs and expand our brand,” Taneja says. 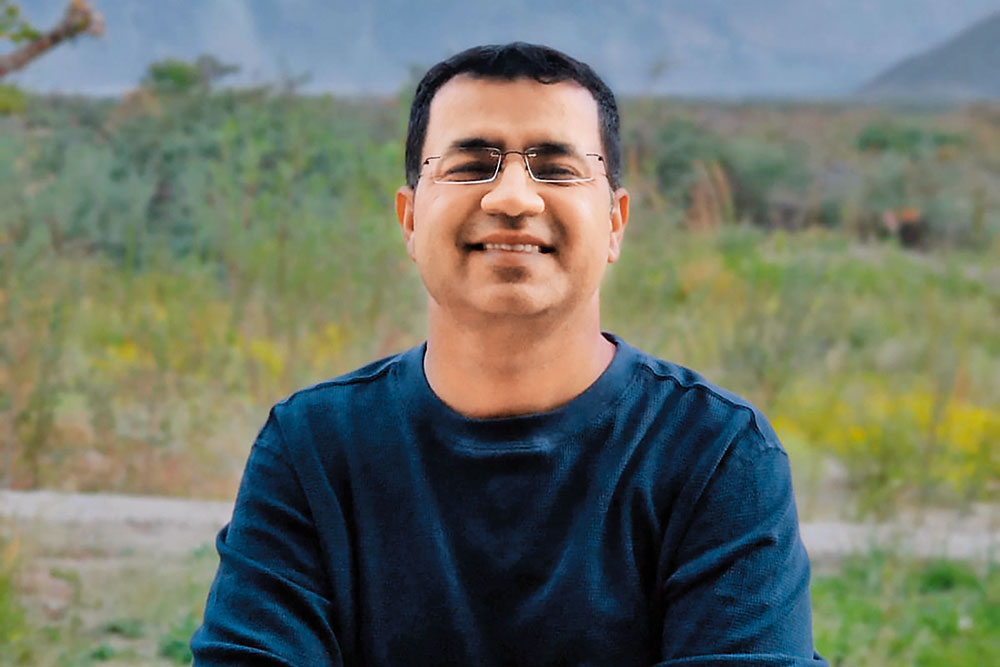 When at home, he goes for a walk twice daily. While the exercise keeps him physically active, it also gives him his “me time” during which he leaves his cell phone behind. “I carry a folded paper and a pen when I go for a walk. Whenever I get an idea, I jot it down,” he says as he gets up to fetch a sample.

An avid reader, Taneja recalls a visit to the doctor when he had to wait for an hour. “I am in awe of the Tata group. That day I downloaded a book titled #Tatastories by Harish Bhat and started reading it while I waited to see the doctor,” he says. He usually reads three to four books simultaneously. “I would highly recommend ‘Inside-out Leadership’ by Rajiv Vij for every leader. Since it is written by an Indian author, we can relate more to it,” he says. These days, he is reading “How to Stay Sane In An Age of Division” by Elif Shafak. During his trip to Ladakh, he was so inspired by Buddhism that he picked up several books on the Dalai Lama.

The three women in his family—his mother, wife and daughter—have been a great source of inspiration, he says. “It is hard to work as hard as my mother does. At 64, she works 18 hours a day and walks 25,000 steps,” Taneja chuckles. His wife, he points out, gives him honest and detailed feedback on the company’s products. His daughter makes the third corner of the triangle with her surprising curiosity.

Taneja is aware that he has the “privilege to influence many lives”. He wants to take up more activities under corporate social responsibility. “I want to do something for nature. I also fundamentally believe in strengthening education and want to work for education for the underprivileged.” Inspired by his Ladakh trip, he wants to encourage more women to become financially independent.

“Pursuit of happiness for me is to go after my dreams. A satisfying feeling is when you dream of something and you do it,” he concludes.