The meteoric rise and the silent demise of the iconic iPod has left us asking one question—is it the end of the road for digital music players?

7,505. That is the number of days Apple’s digital music player, the humble iPod, remained a personal favourite of millions around the world since its launch on October 23, 2001 until  it was curtains for the revolutionary product a little over  20 years later—in May this year.

Between 2001 and 2019, Apple launched several iPods in addition to the original iPod—iPod Mini, iPod Nano, iPod Shuffle and iPod Touch—each better than its predecessor. The very fact that you could roam around with thousands of songs stored in a small device with a super thin 5 GB hard drive that could easily fit in your pocket held special significance at a time when people had to burn CDs, buy several cassettes or rely on radio to play their favourite songs.

But there was more to the iconic iPod than just music. When it had just been released, owning an iPod meant instant validation of status and style which made people popular in their friends’ circle. Before smartphones took over, it was the iPod that people spent a lot of time musing over as it could play up to 10 hours of continuous music on one charge.

A Thousand Songs in Your Pocket

“With iPod, listening to music will never be the same again,” Steve Jobs, Apple’s former CEO, had said while launching the iPod. With the iPod, Apple has invented a whole new category of digital music player that lets you put your entire music collection in your pocket and listen to it wherever you go, the CEO had explained.

“It did not take long for Jobs to realise that music was going to be huge,” Walter Isaacson wrote in his book Steve Jobs.

When Jobs unveiled iTunes, Apple’s music application, in January 2001, he had bigger plans. The next step in the company’s digital hub strategy was to make a portable music player. Just a few months after iTunes followed the iPod—a project Jobs was passionate about as he loved music. The iPod was Apple’s special product.

“The spirit of the iPod lives on through the company’s other products,” Greg Joswiak, Apple’s senior vice president of worldwide marketing, had said in a statement.

While the iPod did take some cues from Sony’s iconic Walkman, Apple took the experience to a whole new level. The same was evident in its sales. In January 2007, Apple reported record quarterly revenue of $7.1 billion, of which 48% came from iPod sales. In the first fiscal quarter of 2008, 42% of Apple’s revenue came from iPod sales—seeing $4 billion in revenue.

However, iPod’s revenue had started dwindling in the first quarter of 2009 itself when it fell to nearly 28% of Apple’s revenue. By the fourth quarter of 2014, it dipped to less than 1% and made just $410 million in revenue. 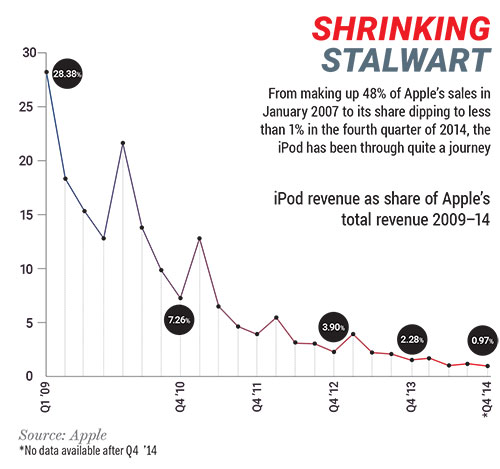 When it Went off Tune

The iPod is credited for turning the company’s fortunes before the iPhone did. At 54.83 million, iPod global sales peaked in 2008. At the September 2009 keynote presentation, Apple had announced that the total cumulative sales of iPods had exceeded 220 million. However, since then, iPod sales decreased every financial quarter as iPhones captured the markets.

The iPod Touch was launched in 2007, months after Jobs unveiled the first iPhone or, as he called it, “a widescreen iPod with touch controls”. It had mostly the same hardware and software features as the original iPhone, minus the parts that made phone calls. The sixth generation of the iPod Classic and and the third generation of the iPod Nano were released alongside.

With a 3.5-inch touch screen and WiFi support for Safari, Apple’s browser,  and to play videos on YouTube, the 2007 iPod Touch was seen and sold as a complete device. Between 2007 and 2010, the iPod Touch was upgraded each year. The fifth generation, however, was launched in 2012 and it took Apple another three years to launch the sixth generation. The seventh, and the last, generation of iPod Touch came in 2019. 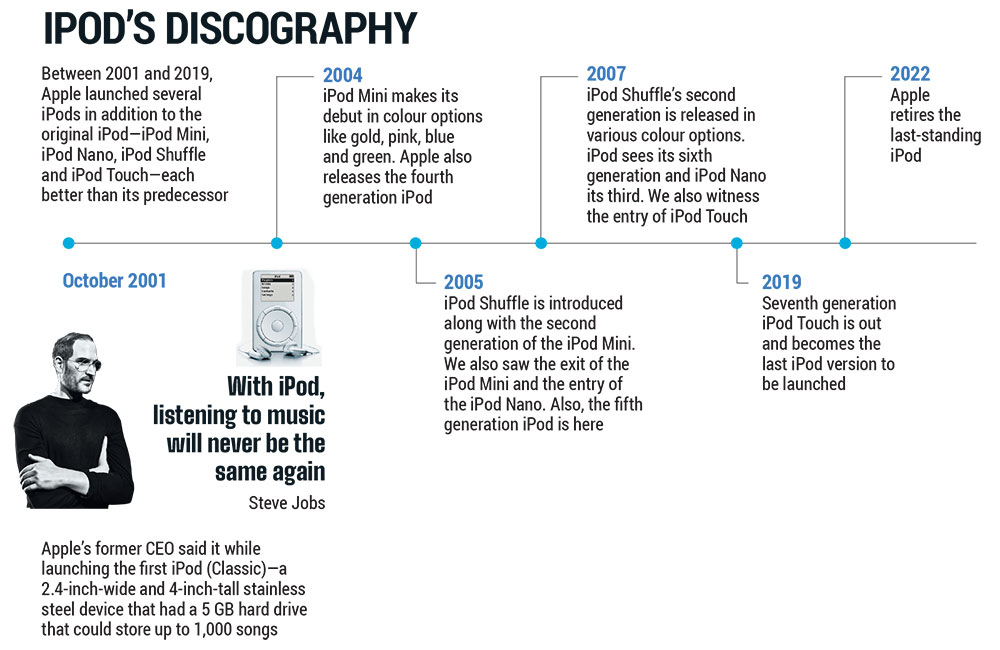 While the original iPod Touch lacked a camera and a microphone, the fourth generation version offered it all. In 2011, Apple even added its instant messaging service iMessage, notifications and iCloud. A few more upgrades followed—mostly in terms of chip upgradation.

The seventh generation iPod Touch was seen as a last-ditch effort to revive the iPod line-up amid the increasing popularity of the iPhone and the iPads. Since then, there were no mentions of the humble iPod at any of the Apple launch events, pretty much sealing its fate.

With smartphones replacing just about every gadget with specific applications, the popularity of dedicated music players has been on the wane for the last few years.

It is tough for even smartphones to stay relevant for more than two years as new iterations of flagships make them dated within months. It was only a matter of time before companies making music players took the final call. 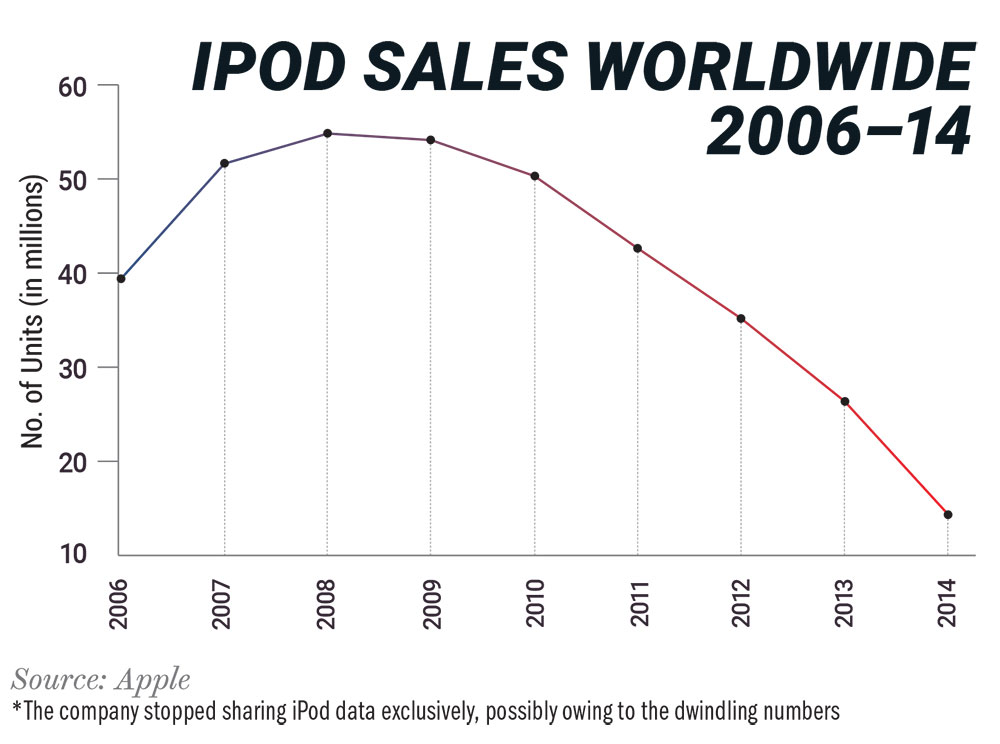 Sony tried to revive its Walkman in 2020 by making it smarter with Android support. However, at a launch price of Rs 24,000, it never stood a surviving chance in the competitive market. Sony has not given up though. As per media reports, a new Walkman may come out in a few months but its fate hinges on how people will receive it.

Even in terms of the seventh generation iPod Touch, the pricing was a concern—starting at Rs 18,900 for the 32GB variant and going up to Rs 38,900 for the 256 GB variant. The pricing was not at all appealing for those who could add a few extra rupees and get an iPhone instead, especially when the brand’s relatively cheaper phones like the iPhone SE were already available and could give people more in terms of value. The iPod loyalists could still find some solace in the new iPhone SE as it comes really close to how the last iPod looked and performed. Some might even try to get their hands on the last iPod stock before it depletes.

Regardless, the iPod’s last few days have been set aside for the old playlist that will be played by many on their trusted iPod as the swan song of a device that filled their lives with melodies for two decades. Cue the music.